Our second story this week is local. Canada's regulator, the CRTC (Canadian Radio-television Telecommunications Commission), has started consultations to un-bundle TV channels for cable and satellite payTV. In essence, the regulator asserts that TV bundling of channels might be consumer-adverse and that forcing someone to pay for basic cable/satellite + digital channels + movie package + HD + HBO in order to watch Game of Throne is not in the consumer's best interest.
Already both sides of the discussion are engaging in strong arguments. On one hand, it is true that bundling has allowed consumers to discover new content that might not have been their initial choice when selecting their channel line up. In many cases, you are drawn to a new show or a new series by a combination of peer recommendation, preview / advertisement and pure chance. If you did not select the channel to start with, you are removing a large part of the discovery opportunity and I do not see how that can benefit the consumer , the programmer or the announcer. There are already rumors that some US channels could just pull out of Canadian airwaves rather than bend to Canadian pick-and-choose TV which could set a precedent in the US.
On the other hand, TV bundling and prices have gotten out of hand in Canada. It is not unusual to pay over 100$ per month for TV programming which is a high price if, when all is said and done, you watch in average maybe 15 channels in your fixed rotation. Unbundling could certainly cut dramatically in cost to the consumer if they are allowed to select their channel individually rather than in bundles. That's if the MSOs practice a fair price, which is a big if in Canada. Coopetition has been the operating model rather than aggressive competition and prices for unbundled channels could end up being more expensive than bundled, which would end up damaging the consumer's wallet, angering the US right holders and precipitate OTT exodus.

I am in favor of unbundling, but it has to be done in a very careful fashion. It can be beneficial to the consumer only if:


In this manner, the successful channels will reap the bulk of the consumer money, but special interest channels will still reach their audience. Channels that have no audience will not be artificially sustained by bundled package. Channels will be able to compete on a series by series, show by show, encouraging original programming and exclusive rights, allowing true competition for premium content.

These two stories illustrate perfectly the risks and opportunities of OTT vs payTV. The business models are not settled yet, major players are announcing new moves every week. It is an exciting time to work in this industry.
Posted by Patrick Lopez at 29.10.13 No comments:

Two pieces of news caught my eye over the last week that spell in my mind both a vindication and a perfect example of the seismic changes being experienced in OTT and payTV landscapes in North America.

The first story is in the US. As I was mucking around provisioning my new car's hard drive with my eclectic music collection earlier this week, my son stumbled upon an old time favorite and I was elated to witness his discovery of Dire Straits' "Money for Nothing". As we were happily singing I want my.... I want my MTV, I was reminded of a post I wrote two years ago, musing about when HBO would be able to go direct to customer in North America.

It seems my question was answered this week, with Comcast launching a new plan for cord-cutters and cord-nevers, offering Xfinity Streampix, HBO and HBO Go together with broadband for $39.99. A US Comcast customer will be able to watch HBO over the web on their broadband subscription without having to be a cable customer. The FCC (US regulators) mandates that premium channels have to be bundled with basic broadcast, so that's in it as well, but this is a clear tipping point moment. For the first time HBO is going head to head with Netflix, going pure OTT. As I am moving to my new house next month, This had me rethink my TV strategy and I am certainly going to wait and see what trickle downs in Canada. Increasingly, I am thinking of upping my broadband subscription and shaving as much as I can if not cutting outright my Cable / Satellite subscription.

The implications are profound and it is a floodgate moment. On one hand, Netflix has now more subscribers than HBO, which prompts Comcast to start the self cannibalization. If you are loosing subscribers, you might as well loose them to yourself and a friendly content provider rather than a competitor.
You will read about the second story tomorrow.
Posted by Patrick Lopez at 28.10.13 No comments:

My agenda at Broadband World Forum 2013

I am looking forward to present and chair a few tracks at the Broadband World Forum next week in Amsterdam.

Here are a few of the slots I will be presenting / moderating / chairing:

October 23rd:
I will present in the 5G workshop and participate in a panel:


October 24th:
I will chair the Wireless Broadband Innovation day comprised of  Smart Cities of the Future and Video and Traffic Management:

Smart Cities of the Future

Firefox OS: The Web as an Open Platform for Innovation and Consumer Choice
Tristan Nitot, Principal Evangelist & Founder of Mozilla in Europe, Mozilla

How will Heavy use Video Systems Co-Exist in the Future?
Eric Klinker, CEO, BitTorrent, USA

Email ThisBlogThis!Share to TwitterShare to FacebookShare to Pinterest
Location: Amsterdam, The Netherlands 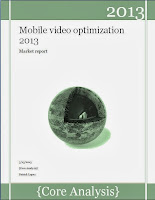 As it is now traditional (here, here and here) , I update my video optimization market report mid-way from its release post mobile world congress.
This update sees many changes, including Cisco's new strategy in the space, together with company and product plans from Citrix ByteMobile, Allot, Flash Networks, Mobixell, Openwave Mobility, Opera Skyfire and many others.

The market trend for the segment reaffirms its maturity. Like last year, the summer has been quiet in term of activity while spring and the fall remain the high RFx quarters. We have recently seen two large groups select their vendor in the space (Telenor and Orange), more or less wrapping up the tier one group selection process for this cycle in mature markets. Growth in this segment now comes from Latin America and South East Asia, where many groups (Singtel, America Movil, ...) have yet to formulate / finalize a strategy in the space. As discussed in a recent post, coming back from LTE Asia, I have been able to experience first-hand both the interest and the confusion on how to manage efficiently OTT video in some of these markets.

Citrix ByteMobile remains market leader, both in deployments and revenue. The deployment relative market share is decreasing slightly to 29%, while revenue market share is increasing. This is the result of the fact that new low-cost vendors are entering the market and tier 2 / 3 customers are buying solutions, depressing the average sale price, while increasing the volume of transactions.

Mobixell Networks remains number 2 in deployments with 23%, once again growing its market share over the period. The company's geographical growth comes from APAC and LatAm.

Flash Networks remains a strong third with 17%, growing as well faster than the market. The company is focusing on profitable growth in mature markets with large tier 1 groups.

While the vendors and their order remain unchanged at the top, the new entrants in the market are exceeding expectations, with good progress from Opera Skyfire and Avvasi for instance, while the mid-segment vendors are seeing their market shares and margin deteriorate.
For more information or to order my report, please contact me.

As usual, I provide market share calculations in term of deployment per vendor, the unit being one operator / country. For instance, Verizon Wireless counts for one deployment, even though the operator might deploy 40+ data centers. Groups such as Vodafone, Deutsche Telekom or Telefonica count for each of the properties where the technology is deployed.

The market share calculations are based on a proprietary {Core Analysis} database, collecting data such as vendors, resellers, value of the deployment in term of total cost of ownership for the operator, operator name, country and region. These data are cross-referenced from vendors' and operators' individual disclosures. This database also includes over 100 opportunities in video optimization that are at different stage of maturity (internal evaluation, vendor trial, RFI, RFx...) and will close over the next 18 months.
The market share is valid at the time of publishing but change on a weekly basis, as new deals are awarded.
Posted by Patrick Lopez at 8.10.13 No comments: