What we can learn from ETSI ISG NFV PoCs

This post is extracted from my report SDN - NFV in Wireless.

Last year’s report had a complete review of all ETSI NFV proof of concepts, their participants, aim and achievements. This year, I propose a short statistical analysis of the 38 PoCs proposed to date. This analysis provides some interesting insights on where the NFV challenges stand today and who are the active participants in their resolution.

Out of 38 PoCs, only 31% have seen an active participation from one or several operators, the rest of the PoCs have seen operators take a back seat and either lend their name to the process (at least one operator must be involved for a PoC to be validated) or provide high level requirements and feedback. The most active operators have been Deutsche Telekom and NTT, but only on the first PoCs in 2014. After that operator’s participation has been spotty, suggesting that those heavily involved at the beginning of the process have moved on to private PoCs and trials. Since the Q1 2015, 50% of PoCs see direct operator involvement, ranging from Orchestration, NFVI or VIM with operators who are mostly new to NFV, suggesting a second wave of service providers are getting into the fray with a more hands-on approach. 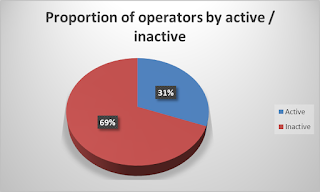 Out of the 52 operators participating in the 38 Pocs, Telefonica, AT&T and BT, DT, NTT, Vodafone account for 62% of all PoCs, while other operators have only been involved in one PoC or are just starting. Telefonica has been the most active overall, but with all of its involvement in 2014, no new PoC participation in 2015. AT&T has been involved throughout 2014 and has only recently restarted a PoC in 2015. British Telecom has been the most regular since the start of the program with in average close to one PoC per quarter. 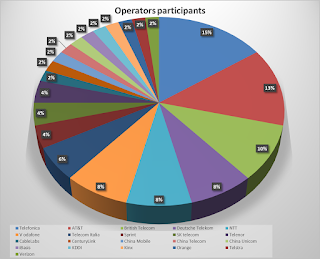 On the vendors’ front, 87 vendors and academic institutions have participated to date to the PoCs, led by HP and Intel (found respectively in 8% of PoCs). The second tier of participants includes, in descending order, Brocade, Alcatel Lucent, Huawei, red hat and Cisco, who are represented in between 5 and 3% of the PoCs. Overwhelmingly, in 49% of the cases, vendors participated to only one PoC.


The most interesting statistics in my mind is showing that squarely half of the PoCs are using SDN for virtual networking or VIM and the same proportion (but not necessarily the same PoCs) have deployed a VNF orchestrator in some form.
Posted by Patrick Lopez at 10.9.15