Video is eating the internet: clouds, codecs and alliances 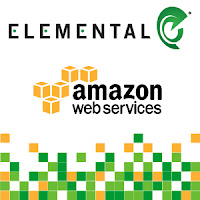 A couple of news should have caught your attention this week if you are interested the video streaming business.

Amazon Web Services confirmed yesterday the acquisition of Elemental. This is the outcome of a trend that I was highlighting in my SDN / NFV report and workshops for the last year with the creation of specialized clouds. Elemental's products are software based and the company was the first in professional video to offer cloud-based encoding on Amazon EC2 with a PaaS offering. Elemental has been building virtual private clouds on commercial clouds for their clients and was the first to coin the term "Software Defined Video". As Elemental joins AWS, Amazon will be one of the first commercial clouds to offer a global, turnkey, video encoding, workflow, packaging infrastructure in the cloud. Video processing requires specific profiles in a cloud environment and it is not surprising that companies who have cloud assets look at creating cloud slices or segregated virtual environment to manage the processing heavy, latency sensitive service.

The codec war has been on for a long time, and I had previously commented on it. In other news, we have seen Amazon again join Cisco, Google, Intel, Microsoft Mozilla and Netflix in the Alliance for Open Media. This organization's goal is to counter unreasonable claims made by H.265 / HEVC patent holders called HEVC advance who are trying to create a very vague and very expensive licensing agreement for the use of their patents. The group, composed of Dolby, GE, Mitsubishi Electric and Technicolor is trying to enforce a 0.5% fee on any revenue associated with the codec's use. The license fee would apply indiscriminately to all companies who encode, decode, transmit, display HEVC content. If H.265 was to be as successful as H.264, it would account in the future for over 90% of all video streaming traffic and that 0.5% tax would be presumably levied on any content provider, aggregator, APP, web site... HEVC advance could become the most profitable patent pool ever, with 0.5% of the revenues of Google, Facebook or Apple's video business. The group does not stop there and proposes a license fee on devices as well, from smartphones, to tablets, to TVs or anything that has a screen and a video player able to play H.265 videos... Back to the Alliance for Open Media who has decided to counter attack and vows to create a royalty-free next generation video codec. Between Cisco's Thor, Google's VPx and Mozilla Daala, this is a credible effort to counter HEVC advance.

All in all, video is poised to eat the internet and IBC, starting next week will no doubt bring a lot more exciting announcements. The common denominator, here is that all these companies have identified that encoding, managing, packaging, delivering video well will be a crucial differentiating factor in tomorrow's networks. Domination of only one element of the value chain (codec, network, device...) will guarantee great power in the ecosystem. Will the vertically integrated ecosystems such as Google and Apple yield as operators, distributor and content owners organize themselves? This and much more in my report on video monetization in 2015.
Posted by Patrick Lopez at 4.9.15